The number of foreign clients using Grocery Magnet continues to grow. Most campaigns for brands from Portugal, the Netherlands or Lithuania, among others, were conducted with their home markets in mind. But the Hungarian Ministry of Tourism decided to approach the subject a little bit differently. They used the Grocery Magnet platform to promote Hungary among the Polish Internet users. 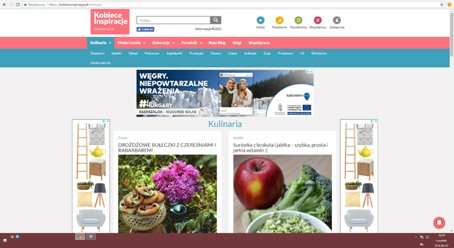 “Hungary – a unique experience”, the campaign of the Hungarian Ministry of Tourism was run from 1 to 30 June 2018. Its aim was to encourage Poles to make holiday visits to our eastern neighbours.

The unique targeting algorithms offered by Grocery Magnet allowed the advertising message to reach the right audience. The campaign aimed at people who search for Hungarian cuisine recipes on the Internet.

The client decided on a campaign in the vCPM model. This means that the algorithm counting the views counts them only when a creative is viewed for at least 2 seconds. The campaign used creatives consistent with the Standards and Recommendations for Display Advertising developed by the IAB.

Within a month, the advertising message reached almost 4 million Polish Internet users. Good results of the campaign encouraged the client to repeat the campaign. This time, the new creatives were promoting the New Year’s Eve trips.

Successful promotional activities in June resulted in continuing the cooperation for the next months. The new banner campaign dedicated to Polish Internet users was carried out under the slogan “Hungary – let yourself be enchanted”.

Activities to promote Hungarian tourism went on from July 11 to December 31, 2018. They focused primarily on Polish Internet users who visit culinary websites in search of recipes for Hungarian dishes.

Check who else chose Grocery Magnet for their campaign!